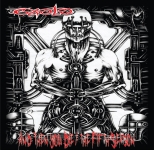 EXOTO
And Then You Die / The Fifth Season
(Vic Records)
71:04min

This remarkable compilation gathers two killer demos released in 1991 and 1992 by Belgian band EXOTO, for the first time in CD format. This energy-ridden result offers potent Death / Thrash Metal that screams old school. I was reminded of those European underground bands that followed in the steps of KREATOR, such as POISON, early AGRESSOR or MINOTAUR. Yet, in spite of playing dirty Thrash, EXOTO’s technical abilities at the time are evident, and although this re-release sounds as good in sound quality as a recent recording, the aggression is not lost, and it remains lethal! They were fine musicians and it shows. Occasional acoustic intros spew really heavy music, sometimes at a slower pace, as in ‘Ashes From The Past’ (sounding a bit PROTECTOR – like, as this second demo does) and sometimes right into the thrashing attack, like in ‘Waiting For The Maggots’, but always the real stuff, played the way it’s meant to be. The vocalist always sounds rabid and wild, and so does the instrumental assault. Should there be one needed, this is an excellent excuse to revisit two demos from the history of Belgium, with classic EXOTO tracks like the Speed / Thrash icon ‘After Death’, in a less elaborate but even more aggressive guise than the version in their debut album “Carnival Of Souls” – just listen to that SLAYER – stolen soloing! In the end you get five bonus tracks recorded live in Belgium in 1991. Naturally their sound quality is not great and this bonus shall appeal mainly to the die hard fan or whoever wishes to get an idea of what an early EXOTO gig felt like. And you can hear the rage of the demos spread onto the stage. This is a highly recommended release if you are into old school Thrash. More information can be found at www.facebook.com/pages/exoto/415058545194901, www.vicrecords.com