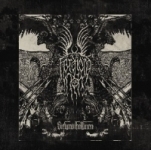 I remember having a CD of this band that was a compilation of their demos and finding it not that interesting, but as soon the first riffs of the opener exploded I knew I was in front of something different. Again the Finnish horde attacks with their second album of raw necro Black Metal, but this time with better guitar riffs and more aggressive. My complain will be the very bad drum sound… no, I do not care if they wanted to sound “raw” that sound is just plain pathetic for such a good album and deserves certainly a better fate. There is a strong VENOM influence in their sound and Satan knows there is also a strong Punk influence buried in there too… as with many other bands in the Hammer Of Hate roster they use their native language to spit darkness all over, so I do not really know what the songs are all about, but the sound might be a clear indication… by the way their name is in Swedish and it means ‘Destroyed’… it is an album that deserved to be recorded in a better way to show that evil black arts can be done with class and still keep it raw… it is easy to hear that the performers really know their instruments as they are not afraid to use melody and some acoustical parts… at times it is hard to compare the band to any other, although you know you have heard it before… probably a more epic DARKTHRONE would be an indication… and for once a Black Metal band that plays heavy, just listen to the song that gives title to the album to comprehend… if this used a better drum sound, probably a bit more variety in the vocals, this would be a dreaded dark monster album… still, very interesting and truly a band worth re-discovering. www.hammer-of-hate.com