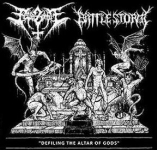 This one is for all those who like their extreme Metal the simple, old fashioned way and do not care too much for filigree musical skills. "Defiling The Altar Of Gods" is a split release that features two bands who are more or less one man projects. The man behind FETID ZOMBIE is no one else than famous cover artist Mark Riddick (Riddickart), who is responsible for anything here, including drum programming. To my great relief, the drums sound pretty natural here, so they don’t spoil the joy of three songs that are rooted in the early and even more pre – Death Metal sound of the 1980s. As the opening ‘Noxious Belief’ has a very nice touch of MASTER and a little REPULSION (with a short, really classic guitar solo), ‘Hellish Strike’ surprised me with some ideas that reminded me of even some old classic Metal stuff. Aside from riffs and breaks of the old school, this midtempo based track also has some faster breaks in the old Thrash vein. Cool one, indeed! The final ‘Fullmoon Necrophilia’ has a nice SLAUGHTER touch, but features an unexpected melodic break as well. Old fashioned extreme Metal with cool and surprising ideas – thumbs up for FETID ZOMBIE. On the other side of the EP, we have the blackened Death of BATTLESTORM from Singapore, where a vivid Metal scene exists. Hades is the one in charge here, who took some help from session musicians, among them a real drummer. And it’s the very unorthodox drumming of Iblis, who makes the opening track ‘Genocide Regiment’ pretty unusual. Somehow I feel reminded of my first live contact with VADER, when Doc (R.I.P.) also presented an uncommon way of smashing the drums. ‘Total Desaster’ is a well executed DESTRUCTION cover, that has a very own charming old school feeling. This rather cool split ends with ‘A World’s End’, that manages the balancing act between Death and Black in a very fine way. Thumbs up for BATTLESTORM as well! Both bands can be found at the place where the whole world meets. FETID ZOMBIE at www.facebook.com/pages/fetid-zombie/153944411335254 and BATTLESTORM at www.facebook.com/pages/battlestorm/164088896942608, you might also check the label: www.alprods.net