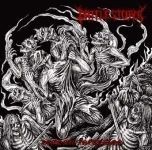 BATTLESTORM is an interesting band from Singapore, active since 2007. The original version of "Demonic Incursion" was released in 2010 by the cult Japanese label Deathrash Armageddon (strictly limited to 800 copies). Here we have the fourth reissue of this full length album, re-released in 2018 by the Colombian label Trauma Records. This reissue has a new front cover artwork and two bonus cover songs: ‘Satanas’ by SARCOFAGO and ‘Blasphemous Attack’ by BLASPHEMY. Ok, this is a pretty brilliant example of raw and brutal Black / Death Metal, that is able to mix the typical sounds of this kind of style; ie BATTLESTORM take the best from various scenes that saw the birth and the recent rebirth of this Satanic loudness: Canada, South America, Oceania and Far East. A savage onslaught of blasphemous and morbid hymns in the vein of the two above mentioned bands, as well as IMPIETY, PROCLAMATION, MORBOSIDAD, NECROHOLOCAUST, CONQUEROR, CREMATION, DIOCLETIAN, REVENGE, GOATPENIS, BESTIAL WARLUST, BLACK WITCHERY, ORDER FROM CHAOS, very early BEHERIT etc. BATTLESTORM is more on the side of chaos and noise, than the more cold melodies of typical Black Metal and not even the ritualistic atmospheres of bands like VON or ARCHGOAT. You know, in the last few years tons of Black / Death Metal bands with chains, spikes and black face painting have been born; most of them lack of personality and think that a goat on the front cover and a bad production are enough to match BLASPHEMY’s spirit and spontaneity: what a serious mistake! Well, after listening to "Demonic Incursion" most likely you will think that BATTLESTORM lack of personality and I can’t blame you. However, we have to admit that their kind of chaos is well organized, effective and well played. Here we have ten songs for almost 37 minutes of Satanic ferocity and a very enojoyable sound, not too raw and with a fantastic punchy snare. The blastbeats are killer and the guitar distortion is indeed very chaotic, but well reasoned. If I had to find a bad point, I would say those pseudo melodic riffs that BATTLESTORM spread here and there: truly pointless! Ok, that’s all, this is a pretty addictive album of harsh and brutal Black / Death Metal. Should you buy a copy of it? Yes, if you’re a fan of the Ross Bay Cult, get it without hesitation, because it’s a good album. But if you’re new to this style, – first try the Canadian godfathers of the genre and that monument whose title is "Fallen Angel Of Doom". More band info at: www.facebook.com/battlestorm666, label contact: traumarkhan@hotmail.com