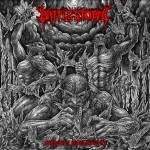 BATTLESTORM is a fierce three piece from Singapore that plays an aggressive old school styled Black / Death Metal with elements of Thrash sprinkled across their entire sound. Even before anything, the maniacal drumming is the first thing we can notice and it continues to dominate throughout the album. Albeit generic, the drummer is a force here. The riffs are standard but played with ferocity, I suppose on the whole BATTLESTORM’s approach is very simple, it is their execution that adds in the charm. The production is decently done and I can clearly see that this band needs to be experienced live. Another point to add here is that the initial novelty wears off post a couple of listens which got me thinking, do I want those relentless skin assaults coupled with spell chanting vocals? Frankly, I wouldn’t mind. The solos are clearly inspired by early MORBID ANGEL and the rhythm picks up its spirit from the German Thrash scene. BATTLESTORM create a storm of verbal and sonic assault from the get go and keep at it throughout the album. Singapore has a well known scene, I can immediately think of IMPIETY and what do you know? BATTLESTORM and IMPIETY share a member, it comes as no surprise as both the bands approach their Metal in a similar fashion. They drench their delivery in evil, spew aggressive chants and the rhythm more or less is similar in spirit. BATTLESTORM however have written some well crafted solos all across which are a pleasure to listen to. Fans of the Singapore and Thailand Black / Death scenes must definitely check this out. For more information, please visit: www.facebook.com/battlestorm666, traumarkhan@hotmail.com