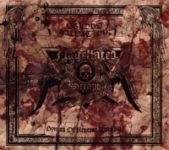 Hail all the filthy black hordes… hails! Out of nowhere crawls this sinister Swedish underground Black Metal act, carrying the name FLAGELLATED SERAPH. This horde’s debut plate of blasphemies contains 6 tracks of malignant, filthy sounding and savage Black Metal with some strong Death Metal overtones having been spred all over the place (especially the vox) – and what’s even better, this stuff catches your attention somewhat immediately. Indeed – and this coming even from a guy who ain’t one of those most devoted and biggest consumers of this one certain style in question that FLAGELLATED SERAPH so clearly represent musically fully for – from the morbid minds and blackened hearts of theirs. What really caught me on this release, is the band’s pretty much untamed and unquestioning way to get their message through as one of those acts that aren’t used to bow to anyone’s direction – just doing their things on their own uncompromising, and yet even in such a devoted way – exactly the way they feel like doing it. Keep it simple – and keep it true to form, is that thing that always works, and that’s the case with FLAGELLATED SERAPH as well. The title track of this disc, ‘Beyond Seraph’, has a really addictive, multiple times repeated riff that won’t let you go. It always tends to come back to haunt you – and it just catches you over and over again. "Beyond Salvation" makes Jesus Christ weep for sadness and desperation – and strengthens the dark forces even more that have always ruled anyway on the face of this rotten planet. More info about FLAGELLATED SERAPH can be found either at: frozenbloodstore.blogspot.fi or www.hellthrasher.com