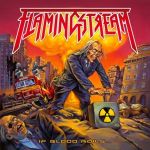 The quintet in FLAMINGSTEAM, they all decided to go separate ways in July 2012. What a pity because the band’s 6-track EP, released on the small Chinese label Dying Legion in 2013, showed a lot of promise in them. FLAMINGSTREAM performed probably the most convincing Thrash Metal coming out of China. They proved to play a melodic, heavily riff-based and well structured Bay Area tinged Thrash; simply the kind of Thrash that more than 50% out of all Thrash Metal maniacs on the globe, dig more than your own granny’s freshly baked tomato pie. Much to my own surprise even, the whole band plays together really well in my humble opinion. Everyone in the band seems to be confident what’s their own role in FLAMINGSTEAM as a part of this solid sounding Thrash Metal band. It’s actually such names as FORBIDDEN, EXODUS, HEATHEN and such, that tend to crawl in mind when spinning this EP. The band’s Thrash Metal is carefully composed and skillfully played thoroughly – with some nice breaks, hooks and solos proving some more vital stamina for this stuff, which surely makes a listener to return back to this opus every now and then. Vocalist Liu Zhuo adds his own twist – with his raspy and dry snarls, into the songs too. Especially his voice serves him very well in the last 2 songs that happen to be cover songs of REPULSION (‘Black Breath’) and VENOM (‘Black Metal’). "If Blood Roils…" was undoubtedly a great start for this Chinese Thrash quintet, so it’s just a great pity they don’t exist anymore. More about FLAMINGSTREAM can be found at: http://site.douban.com/flamingstream, label: www.underfm.com/dyingart/english/discography/trade.htm