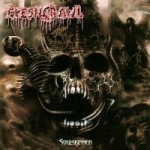 It seems to me that (thanx to their new label Metal Blade) FLESHCRAWL is finally gaining the recognition they deserve. One of Germany’s longest running Death Metal acts has always been a faithful force in the brutal underground and never ever changed for the sake of just getting more attention. During their Black Mark days they unfortunately had to struggle very hard due to lack of promotion and tour support, but luckily were motivated enough not to call the quits and constantly kept releasing great records. Musically these guys always knew to convince anyway and whoever still worships Death Metal in the good old Swedish vein, either already has all their records, or – if not – should certainly make sure to change this immediately. Their newest (6th) full length album “Soulskinner”, is no exception to that rule. The band once more managed to come up with another collection of nine straight forward Death Metal tracks, performed and recorded in the usual raw and uncompromising brutal old school vein. The entire record pretty often reminds me on classic DISMEMBER, while FLESHCRAWL come across even more brutal sounding and the production is very close to that as well. But if you’ve followed the band’s career quite a bit you most certainly won’t really be surprised if I tell you that (just like any other FLESHCRAWL album) also “Soulskinner” was recorded in Sweden. So, after Montezuma, Unisound, Abyss and Fredman they gained new experiences in using Studio Underground this time. I’m not entirely convinced by the additional covertune this time (JUDAS PRIEST’s ‘Metal Gods’), but that’s mainly because of the fact that (in most cases) I personally don’t like to hear classic Metal stuff with growling Death Metal vocals. Apart from that – another great record with a brilliant looking coverart.