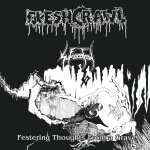 This German Death Metal machine had to change its name from MORGÖTH to SUFFOCATION and then to FLESHCRAWL because of some other more popular bands. Not the best conditions for a young band but in my humble opinion FLESHCRAWL is the best choice, isn’t it? Anyway, I remember the day I bought the SUFFOCATION “Festering Flesh” demo and how I was confused because of the FLESHCRAWL logo sticker on the tape box. But I instantly loved that demo and also the 7” which I purchased just a few months later. The music on this compilation has not much in common with that style FLESHCRAWL stands for nowadays. So don’t expect any Sweden Death here. Back then FLESHCRAWL performed a raw mixture of early US and European style Death Metal. Nonetheless, “Festering Thoughts From A Grave” is a remarkable release. By the way, did I already mention that I totally love early days / demo compilations? Hell yeah, I do and I always liked FLESHCRAWL, back in those early days and I still do. On the debut demo “Mummified Thoughts” from 1990 you’ll find six very raw and heavily Thrash influenced songs. Those songs aren’t that impressive if you listen to them for the first time in 2016. The “Festering Flesh” demo from 1991 was a huge step forward. Sound and songwriting improved a lot. The last two songs on this compilation were taken from the first release under the moniker FLESHCRAWL the “Lost In A Grave EP from 1991” and those two songs were another huge step forward back then and both songs were the highlights of this compilation. To sum it up, here we have the early recordings of an awesome and long existing band which should be added to your collection rather immediately. For all additional FLESHCRAWL information check out: www.fleshcrawl.net or www.facebook.com/fleshcrawl, label contact: www.rawskullrecordz.org