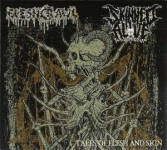 “Tales Of Flesh And Skin” is a case of veterans meeting fresh blood. The German Death Metal legend FLESHCRAWL returns after nearly a decade of silence. And they team up for a split release with a really new project called SKINNED ALIVE. To put it in other words: one band that should not offer a real surprise and one that is up to offer something exciting. As expected, the new stuff from FLESHCRAWL sounds as if the band was not away for nearly nine years now. The ‘Return Of The Flesh’ (following the opener’s title) offers Swedish based Death Metal in its purest form, done by guys who know what they do. On the one hand, this sound is not that rare any more, to say it in a nice way. On the other hand, FLESHCRAWL does so for a quarter of a decade now, and they still kick ass, ready to ‘Reign Again’! And as long as there are songs like the two already mentioned or ‘Kingdom Of Skulls’ with its fine solo guitars, the Death Metal world should welcome the return of the Bavarian masters. So, their also German partners in this crime are challenged. But that should not be any problem for a guy like Ferli Thielemann of MILKING THE GOATMACHINE fame. With SKINNED ALIVE, the multi instrumentalist started his own one man project, that meanwhile grew into a full band. Still on his own, he recorded a fine dose of solid Death Metal with a little Thrash influence in the riffing, that gives songs like ‘The Beauty And The Pest’ or the cool ‘Lingchi’ a touch of Florida. And ‘Lifeless Flesh Released’ actually has some OBITUARY groove as well. Even though SKINNED ALIVE might not be too original yet, this first sign of life hints on a promising future. Besides the tape version with the six already mentioned songs, there’s also a CD edition of “Tales Of Flesh And Skin” that features one more song from each band. While FLESHCRAWL again show great quality with ‘Black Souls’, SKINNED ALIVE bow to the mighty DEATH with the great ‘Stroked With An Axe’. So, in this case the CD version is the better choice. More info can be gathered at www.fleshcrawl.net, www.facebook.com/fleshcrawl or www.facebook.com/skinnedaliveofficial. And click the label as well: www.facebook.com/brutalartrecords