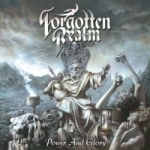 FORGOTTEN REALM are destined for power and glory are the last words of the record company introduction and honestly speaking my ideas after listening to this record are not completely in line with this statement. The musicians behind this band are well known (for example former MANOWAR drummer Rhino) and especially the guitar front is very tough with great solos but I can’t trace anything essential during the 56 minutes of this release. Think that first of all we are not talking about Power Metal, it’s more a less a pure Heavy Metal release because the aggression level is really low. What makes me feel sick are lyrics like “Don’t drown in sorrow when there’s tomorrow” or “No ones giving, you’re not living” which I would never expect from a band from the US. The much bigger problem is that even if the solos are great nearly every song is following the same scheme, with a solo in the middle of the song plus a catchy refrain. So after surviving nearly an hour of “Power And Glory” with a nice DIO/RAINBOW cover (‘Man On The Silver Mountain’) at the end I can only admit that there had been worst releases than FORGOTTEN REALMS debut but luckily only a few. For all further info check out the following websites: www.myspace.com/theforgottenrealmband, www.sonicagerecords.com