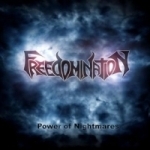 This just arrived on my desk today: A brand-new follow-up 3-track demo release from Finland’s heavily grooving Metallers FREEDOMINATION, who must feel pretty good about their 2nd offering – and not only because they assumable are somewhat happy with the final outcome of this particular release in question but also because they have got one of their all-time heroes for contributing to one of the songs on this demo: Enter no less than Jeff ‘lighting fast fingers’ Waters from the mighty Canadian ANNIHILATOR, who has played a guitar solo in a track called ‘Hide Your Self’, which also happens to be the best song out of these 3 tracks on offer here in my opinion. A blazingly fast, ripping Speed / Thrash Metal number with enough amount of variation to be credited with some ‘true hit potential’ status – no kidding folks. The other 2 songs – ‘Manipulation’ and ‘Gone’ that are, both tend to drag a teeny-weeny too much, lacking of aggression and big, hairy balls – and as a result of all this, ending up sounding just so-so tunes in the end. ‘Manipulation’ basically brings some leftover MACHINE HEAD track my mind – and the vocals of Timo Ahlström in this tune are honestly pretty much horrendous (no offense though). ‘Gone’ then again, would have needed a fast part or two to better stand out. Now it only manages to sound sloppy and lazy at best, which is a pity – apart from some sticking melody sections in the chorus part that have this nice tendency to get stuck in your head every now and then. What they would need badly for their sound, is a fair amount of more explosive aggression – and I would even go that far by saying they should either find a new vocalist, or their current vocalist should switch his vocal approach to a more aggressive type of vocalism in order to kick the band on the next level. Both alternatives should work better for them, I guess. www.freedominationband.net