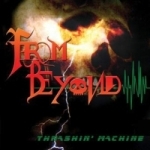 Old school time! This MCD by FROM BEYOND from Belgium offers pure 80s Thrash Metal in the vein of early DESTRUCTION / SODOM / KREATOR, nothing less, nothing more. On four songs (plus an acoustic outro) two former members of the Black Metal band MORIBUND indulge their passion for the good old times. The riffs are competent and fast as hell and the vocals are raw and raspy, but the one thing that scratches the good impression is the drumming which apparently seems to be a drum computer. The inorganic, sterile drum sound slightly damages the old school atmosphere. In the 80s this band / project (?) surely would have found their following but nowadays it is questionable whether this release can address a larger audience. But old school Thrash Metal lunatics, especially those of the early releases of the aforementioned trinity of German Thrash Metal, should definitely give it a chance.