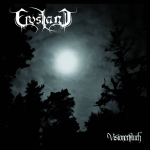 After 3 demos the German Black Metal band FROSTLAND has now released a digital single, a type of release I don’t think I ever will get used to, though a great way for an unknown or unsigned band to get some attention, and in that instance I can accept it, if the music of course contains some quality. FROSTLAND has been around since 2006, with a demo in 2008, one in 2011 and one in 2014 and now this release, so it is not like that the band is churning out new material for the sake of making some noise. Three of the tracks on this release are also taken from the latest demo "Dekaden Der Dekadenz" leaving two new tracks, the title track ‘Visionenfluch’ and a cover version of the Norwegian Black Metal monster ONE TAIL, ONE HEAD ‘The Splendour Of The Trident Tyger’. This also leaves this release a bit schizophrenic as the 3 tracks from the latest demo are in the vein of atmospheric freezingly cold Black Metal as BURZUM and one of the countless bands he inspired… NARGAROTH, which is done quite well with a great ambience and punch. The cover version follows the original’s thrashy rhythm and Rock’n’Roll attitude, which is a bit off what FROSTLAND is doing. The new track ‘Visionenfluch’ feels a tad darker than the older material, though follows my favorite track ‘Fern Der Sinne’ quite well in the melancholic and cold vein, grey and miserable emotions come to the table, together with some reminiscense of guitarwork, compostion and progression of classic Scandinavian melodic Black Metal. When it comes down to a conclusion, I like what FROSTLAND is doing, due to their sound and ability to create an ambience and atmosphere that makes Black Metal work for me, darkness, coldness, melancholy, sweeping black landscapes as the guitars and vocals in ‘Fern Der Sinne’ invokes. The band has a great base, and has the means to make good music, so I am very much looking forward to see what they will bring to the table in the future. More information at: www.facebook.com/frostlandblackmetal, http://frostland.bandcamp.com