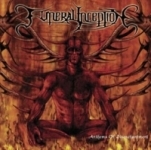 It’s getting quite exotic now – FUNERAL INCEPTION are hailing from Indonesia and previously used to be active under the BLOODY GORE moniker ever since 1996. During their years of existence they unleashed a promo tape entitled “Stench Of Your Perversions”, which first of all was re-released as a 7″ EP (in 1999) and two years later also reared its ugly head on CD once again. Most recently they put out the “Blood Driven Vehemence” MCD, which probably lead to their deal with French Warpath Records. Due to some line-up changes and musical improvements the band decided to change their name into FUNERAL INCEPTION (inspired by the opining track on SUFFOCATION’s “Despise The Sun” MCD) and went on to record their debut full length “Anthems Of Disenchantment”, which features 7 new songs and 3 old, re-recorded, re-arranged songs (from BLOODY GORE’s last MCD “Blood Driven Vehemence”). FUNERAL INCEPTION’s style is heavily inspired by the brutal, yet technical US Death Metal acts such as Suffocation, Disgorge, Cannibal Corpse, Deeds of Flesh, Monstrosity and the likes and despite the usual lack of own identity (which doesn’t really matter in this genre anyway) they’re doing a damn fine job themselves. The album delivers approx. 45 minutes of sheer brutality, guttural vocals and an overall intense, technical songwriting, which almost comes close to the bands of the American scene. And as even the powerful production turned out quite convincing, this release ends up being another worthy purchase for all you Death Metal loving bastards out there. Label contact: www.warpathrecords.com