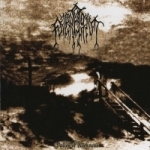 Luxembourg’s Black Metallers FUNERARIUM originally started out back in the year 2000 as UTHER PENDRAGON. In their early days the line-up only consisted of two members: M.S. (drum machine) und DeRais (on bass and guitar). Their debut (instrumental) demo “Songs Of Battle” was released about a year later. A second demo was supposed to be released at the end of 2002, got recorded already (still with programmed drums) but never released because in the winter 2002 / 2003 the band finally found a real drummer (Necroshadow) and therefore decided to do some re-recordings first. In June 2003 the first demo as FUNERARIUM was recorded. Meanwhile Caacrinolaas had joined them on lead guitar, while M.S. left the band and DeRais took over the bass (his vocals were put down to tape in December 2004) and the whole recordings finally got mixed in January 2005. Caacrinolaas left the band shortly after and the demo (simply entitled “Demo 2005”) got released in a limited number of 100 copies. At the end of 2005 FUNERARIUM got signed by Undercover Records, which finally leads us to the release in question here, the “Valley Of Darkness” CD. This ain’t a brandnew recording of the band, but a re-issue of the material from the “Demo 2005”. It features 5 tracks rather lengthy tracks plus two instrumentals: ‘Uther Pendragon’ (a very medieval sounding, yet too long piece) and ‘Outro’. A production in the true sense of the word is almost non existing on this recording. It actually pretty much sounds like a rehearsal (of decent quality though) to me. The whole recording turned out a little strange in general and while listening to it I imagine a band playing live in the basement of a big castle, while the vocalist seems to be locked away somewhere in the dungeon (at least he sounds quite far away, yet very grim). Even though improvements in the production department are definitely needed, this strange sound nevertheless suits these songs here pretty well as it gives the whole material an overall very honest feel. The whole atmosphere is very raw and often quite medieval sounding, while the songs in general are mostly midpaced and very old school. So, if you prefer your Black Metal in the most purest form, you may check these guys out. www.geocities.com/funerariuminhell, www.undercover-records.de