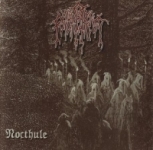 After a demo in 2005 and the debut-album in 2006, FUNERARIUM from Luxembourg (not to be mixed up with the French ones) presents its 2nd full-length album “Nocthule”. De Rais and Necroshadow, the people behind this monicker, offer the typical raw underground Black Metal. Although I have to admit that “Nocthule” has its good approaches, it is all in all too average to leave any remembrance. I can not get rid of the impression that those guys have at times quite good ideas, but then do not dare to follow them. They rather stay at the save shores of typical underground Black Metal. Nothing wrong with that, really, except that there are already far too many bands of the same kind. www.undercover-records.de