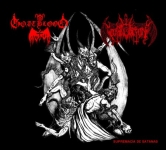 Coming together for this clash of perverse and primitive brutality are two bands playing in the gaskmask / Nuclear War Now! / goat worshipping style. First up are GOATBLOOD from Germany, with an approach like a slower BLACK WITCHERY, bathed in analog, warm production. Simplistic and at times pretty catchy, my favorite aspect of this band are its thought provoking songtitles, such as ‘Cattle I Would Fuck’ and ‘Prolapsed Analdick’. Not a bad listen. I have already heard previous material from the second band on the split, NIHIL DOMINATION. These Ecuadorians were quite promising on their "Sado Perversor Goat Insulter" release, so I was anxious to see what was in store here. The first couple of tracks sound like hammered shit (i.e. not so good), with a production reminiscent of chewing tin foil. I assume there are two different studio sessions, because after a couple of songs like this, things even out and its easier to hear what’s going on. More basic and coke fueled SARCOFAGO worship is puked forth, and NIHIL DOMINATION continue to strike with straightforward and convincing energy. At second glance however, the NIHIL DOMINATION tracklist includes basically all stuff that has been recorded before, a bummer for us dudes wanting new material… All guys who wear their DREAM THEATER shirts tucked in and keep their glasses on while doing gigs are encouraged to check out more at the following sites: www.facebook.com/pages/goatblood/492948934177125, www.dunkelheit-produktionen.de