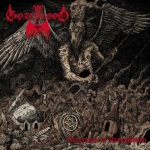 When I first listened to this album from GOATBLOOD without knowning anything about the band, I was pretty sure that I had to deal with a band from South America here. Maybe “Veneration Of Armageddon” was a re-release of a nearly forgotten album of the mid or late 1980s era from a, let’s say, Chilean proto Death Metal band that had an underground following back then. From the first note of the intro ‘Joseph’s Brain’, the musical direction of “Veneration Of Armageddon” leaves no other conclusion. Simple, yet effective riffs, raw vocals that sound like a Death Metal shouter with laryngitis and primitive drum grooves paired with rattling speed parts. Add a sound that reminds me of a recording in a cellar or even a tomb with a four-track recorder, which means, the album comes along very rudimentary, but absolutely charming. Not to mention the name of the band, the complete artwork and the song titles – anything fitted exactly to my thesis. And now imagine my surprise when research revealed that Reverend Slayer and Satanic Death Vulva (yes, even the pseudonyms fit!) are from Kleve in Germany and “Veneration Of Armageddon” was recorded and released in 2016. That was the moment I lifted my hat in respect of songs like ‘Necroromantic Lovers’, ‘Last Siege Of Jerusalem’ or ‘Sexcraving Witchcunt’. It’s a real blessing that there are bands like GOATBLOOD around today who don’t give a fuck about production, conventions or good taste. I absolutely raise both thumbs for GOATBLOOD and need to check out their prior releases, that include one album, three split releases and some demos. If you’re likely to dig their stuff too, check them out at: www.facebook.com/pages/goatblood/492948934177125, or visit the label: www.dunkelheit-produktionen.de