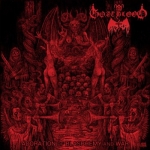 Two-man bands are normally hit or miss. The simpler sound can be brutal or weak sounding. In this case, for Black / Death Metal duo GOATBLOOD, the attack is spawned from the pits of hell itself. If the word "goat" is in the band name, you can pretty much expect it to sound like it was recorded in a dungeon (SATANIK GOAT RITUAL, GOAT SEMEN, SADOGOAT, GOATLORD). After a few seconds of hell-drenched chaos, ‘Appearance Of The Goatlord’ blasts us with the machine-gun drumming of Reverend Slayer. Satanic Death Vulva’s vocals and guitars wreak the fury of hell itself. The good thing about dungeon music such as "Adoration Of Blasphemy And War" is there is no letting up throughout the 31 minute album. No experimentation. No acoustic moments. No drawn out horror movie samples. Simply non-stop energy from beginning to end. And how could you not like songs with titles such as ‘Animal Anal Acrobatics’, ‘Eve Pisses On Adam’ or ‘Fisting Mary, Amen’? Between this and their recent split with NIHIL DOMINATION, I cannot recommend this enough. Search no further for pure hell. Let GOATBLOOD take you deeper into the fiery pits of hell and blasphemy where we belong. For more information, check out: www.facebook.com/pages/goatblood/492948934177125, www.dunkelheit-produktionen.de.