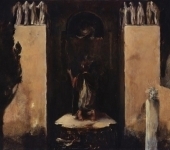 UK’s GRAVE MIASMA – for the uninitiated, they were called GOAT MOLESTÖR once – have originally started as a rather simplistic yet effective and pretty awesome Black / Death act whereas getting rightfully hailed within the entire underground community for their “Exalted Emanations” EP (2009), which skillfully melted influences from South American Black / Death, some early INCANTATION, the greatest elements of Southern European dark lords MORTUARY, VARATHRON or ROTTING CHRIST with the hypnotic flow of BEHERIT in their prime. Heavy, dark, deeply captivating shit, to put it quite frankly. Death Metal with the heartfelt and earnest atmosphere of Black Metal to be more precise – no slams, no baggy pants, no child-rape lyrics, no dull blasting, no synthetic sound, just pure all-consuming darkness, the beauty of the tomb. That’s why I won’t bother you with discussing its production or any other superfluous ballast this time around as either you understand it or not. With its first full-length album, “Odori Sepulcrorum”, GRAVE MIASMA’s unholy path shall continue and the devilish details make this opus even a bit more extraordinary than its predecessor. Increasing the amount of eerie lead guitars, exploring new sonic dimensions and playing around with the stereo spectrum while retaining the old, successful basis – deadly riffs and driving drum patterns topped off with gloomy vocals – GRAVE MIASMA have expanded their sound without getting all the way jazzy, they have just got better. It’s as simple as that and exactly what I hoped for and expected. While I personally liked the lower vocals on “Exalted…” a tad better, Y’s agonized howls add a feeling of utter desolation accentuating the album’s personality and urgency to be more than just some sinister piece of Metal. It is indeed more: it is a mass without any weak hymns, offering foul sermons and macabre rituals aplenty, and thus MUST be revered. So, enter the darkness… Hear a chant here. Conceive your blessing here: www.sepulchralvoice.de