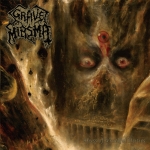 Over the last decade London’s GRAVE MIASMA has built themselves a reputation as one of the leading European blackened Death / Doom Metal bands with a bunch of solid and high quality releases under their bulletbelts and “Abyss Of Wrathful Deities” is their newest full-length album, waiting to be unleashed upon mankind by Sepulchral Voice and Dark Descends Records in a variety of different formats this May. The video track ‘Rogyapa’ is already rolling on YouTube, giving a very good impression of the sound and the direction of this album – visually and musically it has everything their fans might expect from the band – dark, monumental atmosphere maintained by slithering riffs, devilish vocals and aesthetic looks. It really is a standout track and was wisely put out to promote the album. The rest of them follow the similar path, usually set along the crushing, rolling mid-tempo rhythms backed by sulphurous, intricate guitar harmonies and interplays creating a sort of transcendental atmosphere, which the band is known for. It isn’t your usual moshing, slaughtering beast for sure. Also worth noting that the production is much cleaner compared to their earlier works, you can perfectly hear each instrument and little detail. Old, primordial feeling might be lost there, but songs like ‘Erudite Decomposition’, ‘Under The Megalith’ or ‘Kingdoms Beyond Kaliash’ reveal even higher level of songwriting, so surely the guys want you to hear all those little details and interplays. For the die hard fans of the band “Abyss Of Wrathful Deities” might not be an instant hit, purely for lacking that cavernous atmosphere, but it sees GRAVE MIASMA diving deeper into their own underworld, further cementing their solid position as the carriers of the torch that was lit by early INCANTATION, THE CHASM and ASPHYX. Definitely an album which has the potential to grow on you with each new listen but you need to give enough attention to it. I wouldn’t rush and call it a crowning glory of their achievements, some tracks just plod along and do nothing for me, but the balance is offset by aforementioned dark pearls, I’m sure some maniacs find more of them than me! For all the info and different formats check out www.facebook.com/gravemiasma, www.facebook.com/sepulchralvoicerecords.