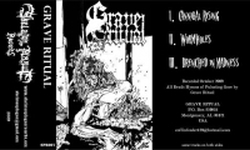 Alabama’s own GRAVE RITUAL started out not long ago and at the end of 2009 released their first, and so far only, demo tape. This self-titled release offers 3 tunes of Death Metal in the brutal old school American way. American way doesn’t mean this blasting and ultra technical Death Metal of bands as EXHUMED or their likes, but with "old school" as prefix I want to point out that this "American way" is handled in the way old masters as especially DEATH or old IMMOLATION were responsible for. Groovy, rhythmbased Death Metal songs, mostly midtempo and with far more atmosphere (well, with atmosphere!) than those blastmasters… Therefore these 3 songs are mostly played in midtempo speed and with dominant rhythm guitars. Totally outstanding on this tape are the vocals which have certain Chuck Schuldiner moments here and there. Mostly the voice is deeper and more brutal, but the additional "screamier" vocals are a fantastic effect and brighten the whole picture. This 3 song demotape is a fantastic start for a new band which sounds old school but not unoriginal compared to other bands of this rising trend of playing old school Death Metal. I’m highly impressed here and so where most likely the labels Razorback Records and Dark Descent Records who already signed these new hopefuls. Both labels share the release whereof Razorback is about to release the CD version and Dark Descent the vinyl version. The forthcoming album is entitled "Euphoric Hymns From The Altar Of Death" and will make my day when it is out. I hope so at least but I have high hopes here, haha. In the meantime I recommend asking Skeleton Plague Records (www.skeletonplaguerecords.com) if they have one copy left of this great demotape to judge by yourself. Check out www.myspace.com/graveritual for additional news and information.