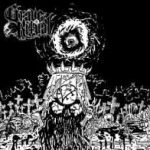 Damn, what a cool, but clichéd title of an album? Clichéd, yes, but we are talking about Death Metal. Death Metal in its purest form. Death Metal for the underground, not your AMON AMARTH, KATAKLYSM or HYPOCRISY who used to be Death Metal but who reached a status their old fans complain about. I don’t want to blame these bands and I truly respect their success and wish them even more in the future. But to come back to GRAVE RITUAL and their debut album, this is Death Metal for the underground Death Metal fans. "Euphoric Hymns From The Altar Of Death" is an album which don’t get praised in the common Metal media and, fuck, that’s great. Just think about the reviews of albums like "Onward To Golgotha" from INCANTATION or "The Dead Shall Inherit" from BAPHOMET. Classic Death Metal records now, but back when they were released the die-hard crowd loved them as much as the mainstream media hated them. And exactly in this category of bands I put GRAVE RITUAL. It’s dark and gloomy Death Metal, little comparable to INCANTATION, the band is old school to the bone and melodies are somewhere else, not on this album. Still I have to say that I liked the demo from 2009 little more than this album, especially due to the more varied vocals. Nevertheless "Euphoric Hymns…" is a Death Metal recording worth to support from Death Metal fans dedicated to the underground and for only those. The vinyl version (released through Dark Descent Records) comes along with lyric sheet and an A4 poster. The CD version is released through Razorback Recordings. So what to say at the end? Are you a Death Metal fan? Then check it out and listen to their words: critical madness is clinical illness, but rotting madness is infinite sickness. Lovely lyrics, Death Metal lyrics. Check out www.razorbackrecords.com or www.darkdescent.net