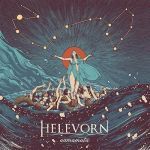 HELEVORN are hailing from my favourite holiday place, Palma de Mallorca, the best known of the beautiful Balearic Islands. Unknown to me so far (shame on me), these gentlemen already present their fourth full-length album in form of "Aamamata". When I started listening to Metal, the first year I spent drowning into all kinds of melancholic bands, like the three big ones from the Northern UK, who taught me that it is possible to capture the dark inner feelings and despair that some of us carry within us into music. And so a big dark world appeared in front of my eyes and enchanted my ears. Another band which I discovered some time later was KATATONIA and their first mini CD and their brilliant debut release. HELEVORN seem to be heavily influenced by KATATONIA and their later works. The opener ‘A Sail To Sanity’ is a really good piece of mournful Doom / Death Metal with sad, slow and thick guitars, good drumming and a good vocal work changing between the well-established grunts and clear melodic vocals. The song is really not presenting anything we have not heared before but their fine sense for songwriting and their good feeling really make the Spanish guys as enjoyable as better known bands like OCTOBER TIDE or their german Pendants DECEMBRE NOIR or NAILED TO OBSCURITY. ‘Goodbye, Hope’ starts with silent strings and clear vocals before the band spreads despair and the good grunts appear again. The deep doomy guitars really fit perfectly into this sad song which finally gets enriched by good piano work. ‘Blackened Waves’ even manages to increase the quality once again. Somewhere in between MY DYING BRIDE and KATATONIA this track with its fine keyboards is a real sea to suffer in. ‘Aurora’ starts with orientalic strings and orientalic female vocals and immediately spreads a similar feeling the guys of ORPHANED LAND offered in the 90s. ‘Forgotten Fields’ again is classic but really good Doom / Death and especially the spoken passages really make this song very outstanding and so it turned into my favourite one of the album even though the remaining tracks are on a similar high level. As I already dropped a bunch of names, it is clear for what special audience HELEVORN is composing material for. A really good album worth to check during this cold and dark winter time. For more information, please check one of the following sources: www.facebook.com/helevornband, www.facebook.com/solitudeprod