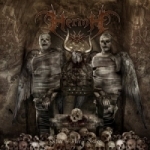 Pagan Records released over 10 years ago some remarkable records, for example the BEHEMOTH debut, the last MORTIIS demo "The Song Of A Long Forgotten Ghost" (as official release) and for sure the last worth mentioning album from greek cult act VARATHORN. But times are changing and the label had mainly been concentrated on their home country scene. This scene still fights with the problem of a lot of potential but unfortunately only a very limited amount of bands had finally gathered a bigger audience outside of Poland. HERMH published their debut nearly simultaneously with BEHEMOTH in 1995 but I don’t think that more than a dozen fans of Nergal & Co. ever heard of them. With "After The Fire-Ashes" they are releasing a very trendy album form because we are not talking about a full new release. It’s more or less a mini CD with some new songs, some re-recorded ones and a cover song (again VENOM and again ‘Black Metal’) and a handful of live tracks. This form is honestly speaking not new and other bands had released such albums (VADER, ANOREXIA NERVOSA etc.) but if your are a fan of keyboard dominated Metal it’s worth investigating. HERMH are not reinventing this musical style and I’m sure that such a band could now only be found on a tropical island far far away but in a way they are still sounding fresh. The most important advantage of HERMH are very good keyboard parts and a powerful sound which gives their music a base aggression. The re-recorded (techno) version of their 2004 Song ‘Red Blood Running’ (from their "Before The Eden-Awaiting The Fire MCD) is Voices unfriendly but the live songs are again on the same quality level so I think HERMH will not conquer whole europe with this release but maybe they get a chance to leave their Polish shores. www.hermh.pl, www.paganrecords.com.pl