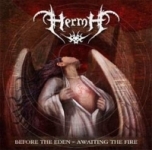 HERMH
Before The Eden - Awaiting The Fire
(Pagan Records)
36:28min

Even though we get approx 40 minutes of music (incl. one video-clip), this is a mini-CD. That’s one really positive thing about this release, for we get only two new tracks. Three tracks are new versions of older songs and we get two covers. Hmm, reminds me a bit about the release from Dimmu Borgir which I never liked since that item was fully prized. Oh well, Hermh released a fine and different Black Metal album a few years ago named “Angeldemon”. The new songs are, as far as I reckon, in the same vein. That’s not a bad sign, because there’s no need to change something that is good. However, Hermh should try to develop a bit, and I can’t see that this necessary development has occurred. Could be the ability to make the songs float has increased, for ‘Hunger’ and ‘Red Blood Running’ run (pun intended) well wrapped in a clear production. Due to the keyboards I guess we should name Hermh Symphonic Black Metal. In fact, the keys seem to be a dominant instrument since the music is more traditional and simple. These songs are fine examples to use when you show your friends how keyboards can lift Black Metal songs from the more standard starting-point. The three re-recordings show us that Hermh hasn’t developed, since they could easily be songs written these days, at least judging from the two new tracks. What I don’t like with this release is, as always, covers. First off, I don’t see the point in doing covers (hmm, tell that to Six Feet Under?). I have never heard a song that beats the original version, no matter how good the actual cover version is. Hermh’s ‘Valhalla’ is not a copy of the original, but hey, I still don’t see the point. Why couldn’t they write another new track instead? And, in my book a cover version will never be a tribute. I would rather prefer if the band used one page of the booklet to honour a band or two. Another point is that I don’t feel like listening to ‘Deathcrush’ done by any other than Mayhem, despite the cool use of keyboards in this cover version. A new full-length, now that’s something I desire from Hermh. www.hermh.pl