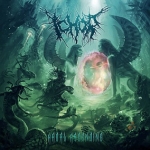 After a break of four years, album number four by ICHOR from Trier, the birth town of Karl Marx. "Hadal Ascending" is some kind of concept album taking up the story-lines of the predecessors, dealing with antediluvian creatures dwelling in the depths of the sea, fights, rituals, the battle of human warriors against what time has forgotten and well, I guess I just have to drop the names H.P. Lovecraft and SULPHUR AEON to give you a outlook of what to expect. The album was recorded at Hertz Studio in Poland, known for excellent work with bands like BEHEMOTH, VADER and HATE, to name just a few. Taking a look a the cover I can not avoid praising the work of Par Olofsson (responsible for covers of, amongst others, ABORTED, THE FACELESS, IMMORTAL) in the highest possible terms, a perfect visual realization. But that is not all, the layout was created by Mentalporn (ORIGIN, IMMOLATION, HATE, BEHEMOTH), another high-class collaborator. Why am I writing 160 words without mentioning the music itself? Well, I just wanted to make clear that this album is the result of passion and lifeblood, not just another side-project, not just another redundant output. And like the external form, the music is crafted with a dedicated sense for details. Death Metal serves as fundament, mid-tempo played with those swirling riffs evoking feelings of otherworldly terror, not from beyond but from the abyssal sea, to stay within the context. Ultra deep guttural, yet accentuated vocals plus swirling, pulsating bass-guitars in addition with drums and guitars are creating songs massive and crushing, but at the same time dynamic. Black Metal riffs and atmospheric synths are supporting the atmosphere created, enlarging the album beyond the realms of typical Death Metal. Listening to this album over and over again made me discover little gems all the time, even after dozens of spins I am still excited. 2018 saw the rise of many, many brilliant Death Metal releases, this one here is for listeners who are willing to take a step further. Modern not in terms of following fashions and trends, but modern in the meaning of taking basic ingredients and adding assorted elements without leaving the genuine realms of Death Metal. The darkside calls here www.facebook.com/ichorofficial and here www.ucdeath.com