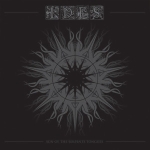 6 tracks with a total running time clocking in at nearly 61 minutes? Guess, this won’t be a Power Violence album, huh?! And when some sort of Gregorian choir starts, soon to be torn apart by the first crushing tones, it’s plain simple that these young act from the Netherlands performs everything but fast music. Except for some rare mid tempo eruptions, this is creepy, crawling and murky Death / Doom my ass!! Don’t get fooled by that, in some parts, really shitty sounding drum computer because this is really good stuff. Ok, IDES are no innovators and they won’t win a price in the category "most diverse album", but hey that’s not the point. The utterly growls seem to come right out of the bowels and with those whining guitar elements, IDES shows some cross references to old PARADISE LOST. But that’s nearly all that reminds of these British mourning stars. "Sun Of The Serpents Tongues" is here to create end time feeling par excellence; the soundtrack to the nuclear winter that leaves nothing but scorched soil. No MY DYING BRIDE melancholy here, even though ‘Survivors Of The Revolution’ has been accompanied by a violin. A song like ‘The Ever Falling’ with its synthesizers, has that similar vibe of which mighty WINTER had been famous for and to me these Dutchmen deliver some stuff best described as a blend of the best parts from the aforementioned, HOODED MENACE, EVOKEN and maybe even GOATLORD and CANDLEMASS, in case some name dropping might makes it easier to get a quote on their sound. As already said; IDES may sound too monotonous to some, but after some spins you get used to it and their raw, dense, but heavy sound and that overall devastating atmosphere gonna captures the listener for one hour of pure aural apocalypse. No cheesy, depressive crap here, this is hard hitting Doom / Death Metal that might become even better with their next release, I bet. Interested slow motion maniacs are requested to check the followings links and get their own copy. www.facebook.com/idesdoom, www.vicrecords.com