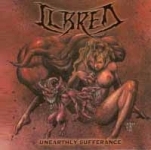 Oh shit, is it really eight years already since we distributed a small amount of copies of ILBRED’s one and only, self-titled demo tape…? Time obviously passes on way too quickly! Anyway, ever since those days this Illinois based band had to go through various negative experiences — starting with the death of their original singer Rick Ohl (who tragically got killed by a drunk driver in 1995), the problems in finding a proper replacement and album recordings (in 1998), that got mixed so badly that the guys even split-up shortly after. We’d probably never get to hear those already recorded nine songs, if there wouldn’t have been a guy named Mike DeRosa who offered ILBRED the remix and release of what was supposed to become “Unearthly Sufferance” on his newly started label Gateways Productions. And that would’ve been a shame, really – cause the material is just amazing! After Rick’s death ILBRED added two (!!) new vocalists and a second guitar player to their line-up, continued on with their basic brutal Death Metal style, but increased the energy level immensely, so that “Unearthly Sufferance” turned into a totally crushing Death Metal assault, which easily stood the test of time and still knows to impress in quite a big way nowadays! It may sound a bit harsh towards Rick Ohl’s legacy, but I even like the new vocals better than in the past… So, everyone who prefers brutal groovy riffing and deep, yet very angry sounding vocals over monotonous blast beat attacks and dog barking style singing will easily get a kick out of this. The production is great and the cover art was supplied by Mark Riddick, who’s done a few other very sick things for various bands in the past already. And the disc also features the three 1994 demo tracks as a bonus, so that you’ll get the whole ILBRED past combined on here. Great idea. The overall positive feedback on this release obviously surprised the ILBRED guys in such a big way that they are currently working together again, with a follow-up release scheduled for winter 2002! Hell yes! But you shouldn’t wait that long and order a copy of “Unearthly Sufferance” for $10(in the US) / $13 (elsewhere) postage paid. Write to: Steve Castaldi, 385 Spruce Ln.#102, Glen Ellyn, IL 60137, USA, e-mail: ilbred@earthlink.net