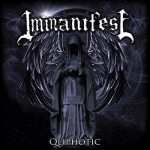 Looking for well-crafted atmospheric, pompous and especially symphonic Black / Death Metal? Then look no further. The Floridian IMMANIFEST cuts your desperate hunt for those kind of bands, for now at least. IMMANIFEST was formed just about 5-6 years ago, and the band’s first recording, which happens to be this 3-track EP titled "Qliptonic", followed 3 years later after some hard practices of the band members. Without any question IMMANIFEST have paid very much attention to their song structures on this very much devastatingly professional EP, just to make them flow naturally and effortlessly, sounding the kind of a band that would rather break up than put out some desperate half-assed releases, which would just introduce them under a negative light for the extreme Metal community. So yeah, from start to finish, "Qliptonic" is a very professionally crafted and tastefully done effort, that in fact conjures up a couple of names in my mind. DIMMU BORGIR’s name is of course the strongest association that comes to mind right away due to similar symphonic elements that many DIMMU’s releases are fully packed with. But then I would lift up LA’s Death Metal horde RISE in comparison to IMMANIFEST as well. This genuinely made, more Death Metallic approach would come from RISE’s direction into IMMANIFEST’s sound if I was forced to describe IMMANIFEST to someone who’s completely unaware of their sound. All of these 3 songs that IMMANIFEST have featured for the "Qliphotic" EP, reek of some top-notch quality of symphonic Black / Death Metal. I must also believe they have caused some serious attention among labels already by this EP – and wouldn’t be surprised a bit at all to see IMMANIFEST on the roster of even some major Metal labels like Nuclear Blast or Century Media someday. Awesome stuff from a pretty awesome band here, I must admit. More about these very promising (to say the least) Floridian symphonic Black / Death Metallers can be found at: www.facebook.com/pages/immanifest/270388841633