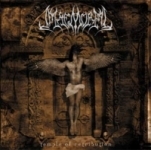 The Swedish Black / Death Metal fivepiece IMMEMORIAL was still unknown to me before the release of their debut full length “Temple Of Retribution”, but I certainly won’t forget their name again from now on, cause the intensity of their material simply blew me away! Basically IMMEMOREAL are nothing but another quite typical, young band from Scandinavia, combining raw aggression with some melodic leads. But due to their immense raw power, they totally stand out of the masses nevertheless. The band was formed back in 1993, released three demos ever since and is nowadays fronted by former ABLAZE MY SORROW frontman Goatnecro. Their info states early DARK TRANQUILLITY and DISSECTION as comparisons, but I would say that IMMEMOREAL is even more devastating, always on a very high musical level and extremely tight in general. So, apart from the factor of originality, which doesn’t really exist (same with almost every other band these days…), this is an excellent record with a great looking cover art, to kick off a promising career with.