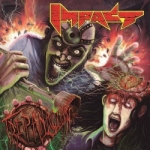 I am always excited when I can check out new bands from my favourite South American country Chile. I have never been disappointed so far and the debut album by IMPACT won’t change this tradition as well. Despite having already been around since 2003, "Trepanacion" is the first long player of this five piece outfit from Santiago. Prior to the full length they just were able to release two demos and a split with their now disfunct country mates LLUVIA ACIDA. Their ten tracker offers very well executed old school Thrash Metal being heavily influenced by the German and US scenes with an unmistakable and lethal Crossover touch. The songs are mostly sung in English except of two tunes done in their native language Spanish which adds some additional headbanging madness to their aural assault. The quintet comes up with a quite solid performance. What you get is a bunch of heavy and aggressive wreckingballs mostly played at ferocious speed (fast but not chaotic) with razorsharp riffing and thunderous drumwork which pushes the stuff always foward. To maximize the intensity and variety the squad always slows down for a while and supplies crushing mid paced parts. Of course having that Hardcore influence you won’t have to miss the obligatory gang shouts in the vocal department. The production is clear, powerful and unleashes perfectly the violence of this horde. If your faves include MUNICIPAL WASTE, NUCLEAR ASSAULT, OVERKILL, SODOM (mid period) and similiar crushing hordes then "Trepanacion" should be of some interest for you. For more info, orders etc. please get in touch with IMPACT directly through www.impacthrash.com or the label at www.sickbangers.cl.