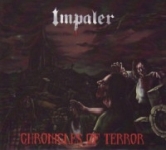 This remarkable and really dedicated compilation released by AreaDeath Productions features the complete demography and some rare material by US shockrockers IMPALER. Covering most of their releases on magnetic tape from 1983 to 1992, you can say goodbye to your traded (or downloaded) versions. Haven’t you heard of IMPALER before? Well, this (cult?) band performs Speed Metal / Sleaze Rock that perfected the imagery of horror in music. Musicwise comparable (in some extent) to THE MISFITS, EXCORCIST, ALICE COOPER and the Powerrock from SUPERSUCKERS, old GLUECIFER and the likes, but still going strong and brutal in their long lasting career. I don’t know how popular the band is in Europe but probably not as much as in US. CD 1 with the band losing their virginity on "Demo 1" from 1983 with tracks like ‘Impaler’ and ‘Assassin’ that still belong to the band’s setlists. Next is the much better "Demo 2" from the same year with ‘Vicious Dream’, ‘Heavens Force’ and ‘Shock Rock’ and showing the band has grown in brutality. ‘Live Hard Die Fast’ and ‘Breathing Down Your Back’ are unreleased songs from a 1984 EP session, showing the band more mature. Tracks 11 – 16 is the "Minneapolis School Of Arts" demo from 1990. It also includes a cover of DAVID BOWIE’s ‘Ziggy Stardust’. The sound is obviously not the best due to its age, but turning up the volume will help a lot and mainly showing its flaw in the hi-hatsound. ‘So Fine’, ‘Come To Me’ and ‘All Worked Up’ are from the "Daddy Raw" demo from 1992 (DADDY RAW was an IMPALER side project when the band was on hold). "Demo 1987" was featured on "The Gruesome Years" but would have suited here pretty well. Also "Demo ’84" and "Demo 1985" are missing and prevents this from a full demography although it’s stated in the bio that ALL their demos are featured. I don’t want to be picky and I guess AreaDeath had their reasons looking at the result and maybe these are just gone, so I rest my case. The rest of this first disc is filled with live tracks from 1984 and 1987, like ‘Monkey See Monkey Do’ and the awesome ‘World Insane’, while ‘Sin City’ and ‘Go Down Fighting’ were never released on an official releases before. This gig sounds a bit like a live version of DEATH ANGEL. CD 2 features the band on stage. Packed in 23 tracks during four gigs (tracks 11-23 are from the second IMPALER live show). First track ‘Rub You Raw’ and fourth ‘Feed You To The Lions’ were never recorded in a studio. Also THE third track ‘Darkside’ is quite unique ’cause I can’t find it anywhere unless this one was later called ‘Welcome To My Darkside’ and featured as bonus on their "It Won’t Die" album from 1998. There are a lot of covers on this one. MOTÖRHEAD’s ‘Iron Fist’, ‘The Hammer’, ‘Ace Of Spades’ and ‘Love Me Like A Reptile’; PLASMATICS / WENDY O WILLIAMS’ ‘Black Leather Machine’; ROLLING STONES’ ‘It’s Only Rock ‘N’ Roll’; JUDAS PRIEST’s ‘Sin After Sin’; RIOT’s ‘Hard Lovin’ Man’, ANTI-NOWHERE LEAGUE’s ‘So What’ and IRON MAIDEN’s ‘Wrathchild’. Unfortunately the sound on this gig is really messed up with guitars too much on the background again and an overall recording quality of a tape laying in the sun for a few hours. Still underground! Notable is that it features ‘Hit With An Axe’ from "Demo ’84". CD 3 for all you die-hards… This one covers the "Wake Up Screaming" LP, which was recorded in 1988 but released in 1990. Track 10, ‘Too Young To Die’ was recorded during the same session, but never got released until now. Track 11 to 20 are from a live recording with decent quality, but again the guitarsound is too much reduced for my taste. The rhythmsection is pounding but Rock music demands an in your face guitar that saws off your balls… especially live! This set contains ‘City In Chains’, ‘Impaler’, ‘Rise Of The Mutants’, ‘Island Of The Damned’, ‘Crack The Whip’ and ‘Vicious Dream’, so a few from the featured LP. Track 21 to 23 are from another live set and features ‘Vicious Dreams’, ‘Kill The King’ (by RAINBOW) and ‘Deuce’ (by KISS). Unfortunately there’s a nasty squeek in all of them. Still it rocks! Last one on this third CD is an almost 5 minutes long interview with J.J. of Twin Cities Metalshop which is a bit corny with weird voices like Beavis and Butthead talking about Ed Gein, IMPALER’s mission. If you call yourself an IMPALER fan you should check this out! AreaDeath did a great job and hope they plan more of such compilations. Check www.myspace.com/impalerhorrorrock, www.areadeath.net for more info.