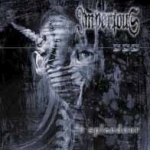 The name IMPERIOUS might not necessarily ring a bell (yet) to most of you reading this, but the real die hard underground freaks among you will probably have heard of Sweden’s OBSCURA already. The band did record / release three demos ever since their origin in early 1997 and also played the Gothenburg Deathfest once. For reasons of unknown origin (at least to me…) they changed their name into IMPERIOUS at the end of 2002, right around the same time when they got signed by UK’s Retribute Records. The first result of this co-operation is a highly impressive debut album by the name of “In Splendour”, which features eleven tracks of brutal and blasphemous US styled Death Metal. The three youngsters already deliver very impressive songwriting abilities and technical skills, so that they will most certainly not remain unknown for too long. Unlike a lot of the current newcomer acts in the Death Metal genre, IMPERIOUS luckily decided NOT to go for the rather monotonous DISGORGE, BRODEQUIN etc. style, but instead focus on the real brutality that made this genre so enjoyable and acts such as IMMOLATION, MORBID ANGEL, INCANTATION and CANNIBAL CORPSE so popular. No real surprise that all these acts, as well as a.o. Nile, Hate Eternal, Deeds Of Flesh, Krisiun and Monstrosity belong to the members faves. When it comes to the arrangements and slower parts, there’s an obvious big MORBID ANGEL influence to be discovered, while the overall atmosphere of the material is a lot more sinister and dark. The very impressive production (Subsonic Studio) and cool coverart courtesy of Mike Bohatch (www.eyesofchaos.com) both fit the record very well, so that I really enjoyed this debut a lot. Hell, it’s totally great to see Sweden gaining back their glory in terms of brutal Death Metal these days, with intense acts such as INSISION, KAAMOS, SPAWN OF POSSESSION, VISCERAL BLEEDING and so on. And IMPERIOUS is definitely another fine example to add to this list, so make sure to check them out! Contact: www.imperious.net, label contact: www.retributerecords.com