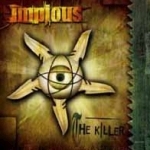 “The Killer” is the third full-length CD of this Swedish act and offers powerful Death / Thrash with the typical IN FLAMES, THE HAUNTED – like vocals. The album was recorded at Mega Studio and fortunately does not sound like one of those Tägtgren / Abyss Studio productions, which have become a little bit boring, unnecessary and similar in the last couple of months. Production-wise “The Killer” is absolutely flawless with a harsh, ripping but still clear guitar sound and hard punching drums. Most songs are quite fast, but not of excessive speed, the tempo varies clever and includes blasts, crushing up-tempo and a few real heavy and crunchy parts too. My personal highlights are ‘Caught In Flesh’, which starts off with a great old style Thrash riff, the crushing opener ‘Burn The Cross’ or the melodic and not so Thrash – influenced ‘Needles Of Sin’, the latter is in my eyes the most Swedish song on “The Killer” and reminds of DARK TRANQUILITY or as stated above IN FLAMES. It has this slight melancholic touch which often is typical for Swedish Melodic Death. But there are some points of criticism too! Maybe they are too subjective, but I will tell them anyway. I had problems to get warm with this CD, because it is in my eyes just a typical Melodic Death / Thrash CD, where the melodies have been reduced. Ok, it is a bit more rough and of higher speed, but all over nothing very special. In three songs there are clean vocals in the background, which in my eyes totally ruin those songs. To speak of the solos I have to say that they are not good at all, they sound lame and do not fit into the rest of the music. Death / Thrash to me should sound as brutal and driving as MALEVOLENT CREATION’s “Retribution” or “Envenomed”, or as vicious as the latest INFERNÄL MÄJESTY, but “The Killer” is just an average modern album, that lacks of the right feeling. If you are a fan of IN FLAMES or THE HAUNTED give it a try, you might love it, but in my opinion there are too many details, that have not been worked out. To take the throne of THE HAUNTED you have to come up with more convincing stuff and also a better cover, this one is not more than a ridiculous fuck!