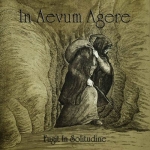 The Italian three piece around Bruno Masulli offers another small sample of their doomish, epical Heavy Metal. Their third EP "Fugit In Solitudine" might be the prelude to a new album since it’s been five years already. What to expect on this five songs EP? Business as usual. Despair in an epical magnitude. Battling guitar solos trying to free Masulli from his doomed life. But he must have swallowed the drop of poison with joy. He just loves the abyss he is drowning in. His voice is like an insane siren which flanks his decline. Climbing up and falling down the tower of octaves. "Fugit In Solitudine" has the capability to be enjoyable 20 minutes of Doom. But I am not really embraced. Neither by the riffing which seems a bit too uninspired nor by the atmosphere. Though these guys never promised anything else, then to bow down to CANDLEMASS, it kind of becomes lame. All four songs go by the tested recipe and consequently the fifth song is a CANDLEMASS cover (‘Somewhere In Nowhere’). Of course not the first one in IN AEVUM AGERE’s history. The lyrics are blunt and meaningless in so many parts, it’s just hard for me to get to the deeper point. Why copying a band which had their peak already quite a while ago and lives (just like so many others) from the pictures of the past. Why not going some own ways? Then again it’s not really up to me to tell others what to do with their lives. In a nutshell, if you like that style I believe you will find something worth listing here. Besides all its predicable moments and foreseeable ideas it’s still all played really well and produced pretty decent. Meaning the actual listening moment is likeable. To me it’s too much Rocky Horror Picture Show (no disrespect Mr. O´Brien) but with way worse lyrical and philosophical work in it. My personal highlight here is the way Masulli fights the word “existence” in the song ‘Existence’. See for yourself: www.facebook.com/pages/in-aevum-agere/35718522561, http://inaevumagere.bandcamp.com