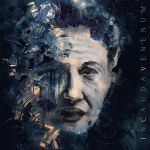 France is one of the countries with a pretty active Black Metal underground. IN CAUDA VENENUM are active since a decade now and the fact that “G.O.H.E.” is only their second release so far after their self-titled debut back in 2015 shows theat they carefully work on their material before it gets unleashed. Like the predecessor, the new album consists of two extra long tracks. Their musical path can be described as Post Black Metal or how they call it “Black Metal tinged with a Post Rock feeling”. But this is a pretty good hint what to expect as their vision of Post Black Metal is broadly diversified. Often Black Metal is only harsh and destroys any coming atmospheres with that, but IN CAUDA VENENUM don’t try to sound as harsh as possible and immediately catch the listener anyway. And the used piano spreads a certain darkness, which can only be found in good horror movies. Also their digressions into some Jazz / Rock directions are pretty interesting and vary the songs, so they are definitely not boring. Their returns to Black Metal are harsh with harsh screams but somehow fit perfectly and the female chants in the back enrich the atmosphere. Seldom that a band caught me within minutes and makes it easy to listen to the album without skipping songs. Here everything fits. Songwriting, atmosphere, ideas, instrumentation and production. Surely you must have a weakness for apocalyptic Post Black Metal but then, the first track ‘Malédiction’ definitely is worth to check. ‘Délivrance’ starts slowly but with intense screams and the violin is damn good and the guitar work is even better. The beginning has a Gothic / Death vibe before they increase the speed and return to Black Metal again. This track sounds like a Black Metal version of MY DYING BRIDE. The changes between caws, screams and spoken passages are very effectful and good. Worth to mention is also the cover artwork which is a little piece of art, same as their music. Black Metal fans definitely should give this album a chance. For more info you can check one of the following sources: www.facebook.com/incdvnnm, www.lesacteursdelombre.net.