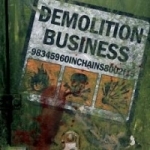 IN CHAINS
Demolition Business
(Rotten To The Core)
32:38min

It’s cool to see there is still some life left in the Belgian Metal community after all these years and that new bands are again making their attempts made from there. So in fact today does the debut album of West Flander’s IN CHAINS spin and aside from the underproduction that plagues this disc – from the first song to the last – particularly with the vocals, bass, and lead guitar, I have to say for a debut album, off of one demo tape, this isn’t too bad. Granted the production eats it (and that is a real shame too as in each of the cases above, you can hear these guys working yet it’s a fuckin’ strain to actually listen to each) and many I would think might just pass on these guys without pause because the production is so flagrantly poor. That said, the rhythm guitar and drumming do stand out enough though to keep the listener entertained and banging brains throughout this thirty-odd-minute affair, for those that can withstand it. Plenty of bands appear in my mind as influences for IN CHAINS, however if I was to pin point for you, the reader, who IN CHAINS absolutely sounds like – I would have to say Japan’s KING’S EVIL… absolutely. And as this album was a promo I have no clue as to the packaging and the rest of this CD. However, the music in general is decent enough and from what I can hear of the vocals, lead guitar and bass – there is quite a bit of potential here to be expounded upon next time the band enters their rehearsal room. In closing "Demolition Business" is good for what it is, however I wouldn’t have released it. Mayhaps as an MCD – if there was a better engineer behind the board, and there was more control over exact song choice. But as this CD is, I just don’t feel the band was / or is 100% yet for a debut album. But I’m sure others would argue against that. Most notably Rotten To The Core Records, right? Contact: inchains.deathmetal.be or www.myspace.com/inchainswesuffer