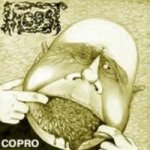 These guys from northern Russia have already undergone quite a few name changes ever since they started out in 1994, from NECROSIS to HELLKITE until they finally went for INCEST in 1998 (which from my point of view ain’t necessarily the best choice of name either). "Copro" is their second release (following 1999’s "The Asfiction Of Primitivism" promo) and consists of two tracks as well as an intro and quite silly outro. Musically they deliver brutal US style Death Metal with deep grunted vocals, technically convincing, but production wise unfortunately rather poor. All in all neither something that I really would freak out on nor groundbreaking in any way, and from time to time unfortunately with an extremely annoying, additional high out of tune sounding female (?!) voice in the background (which should definitely be avoided by all means in the future!). For all additional information contact: antonius666@newmail.ru