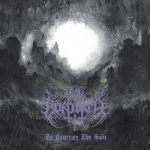 Tagged as depressive and / or atmospheric Black Metal, but truth be told, there is more to it. The guitars are raw and very much up in the front with vocals wailing over them; the bass is buried a bit (but it pays off to pay attention) and the drums are more present. There is some repetition here, but it does not overstay its welcome. "To Exorcize The Sun" is a two track EP and even though these Spaniards mostly stick to mid tempo, they keep it varied enough. The compositions are really well thought out, at least that is the impression. For example: the clean guitar part in the first song is basically the same riff as the one before it, but stripped of distortion. When it is done and a drum fill later, a slightly altered and distorted version follows. So it feels like a theme that develops through slight changes, and thus holds its own seamlessly from one riff to another. This music is bleak in a way that "Brave Murder Day" feels bleak. Especially the second song has the same kind of vibe. Downstroked open strings and heart wrenching chord progressions that culminate in a soulful melodic affair do not seem that much Black Metal, if it were not for the vocals. Not that it is a bad thing, but do not get fooled by the tag that more often is not really flattering. More on INCORPOREA here: www.facebook.com/incorporea-570980176283880, www.facebook.com/vertebrae.label.