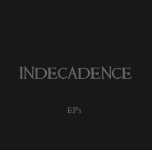 The first mistake of this re-release is the title. There is only one EP ("In Decandence", 2006) plus a demo called "All We Believed In" from the year 2002. The second and more serious fault is simply the fact that the music is mostly uninteresting. Melodic Death Doom Metal in its most needless form. Of course there are some good points in time, especially when the band speeds up a little bit and the interaction of guitars and keyboards create some atmospheric moments. But in general the nine tracks are not convincing. During several listening sessions I have made some notices about each track and the most used words were boring and even more boring. Having the 50 minutes running time in mind there are like ten minutes when the band can compete with bands like early TIAMAT and early KATATONIA. GS Production did a good job by re-releasing such gems like WITHOUT GRIEF but this time it is just something for die hard fans of the seven musicians from Spain. www.indecadence.com, www.facebook.com/indecadence, www.gsp-music.com