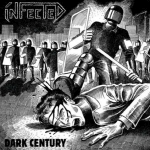 Swiss madness dating back to 1989, originally released by Far Out Records, a label that apparently only released this one album, before both label and band disappeared into nothingness around 1990, and now dug out of oblivion by Dutch masters of such, Vic Records. The band is giving us a healthy dose dark Thrash Metal on its way towards heavier and crunchier Death Metal, with that grey eerie atmosphere Swiss bands in the eighties, so greatly had cloaked their music in, the haunting darkness and mysiticism of CELTIC FROST, MESSIAH and the straight out headbangable thrashiness of CORONER. Musically it is quite catchy, with good and effective riffs, decent technically balanced rhythm patterns, a good crunchy guitartone, reverbed growls and a quite audible bass rumbling around doing good. There is always a lot going on, tied greatly together so it doesn’t get chaotic. A quite well written and recorded album, which for some reason didn’t make a lot of noise back when it was released. Though I guess it is time for INFECTED and "Dark Century" to take revenge, as it might have been too early for such back then, together with the social-realistic lyrics it fell a tad off the wagon, being in the middle of American and Swedish Death Metal getting big, the second wave of Black Metal getting heated up, and powerful Thrash Metal being on its highest. The time is right now, I think, as we don’t have much sounding like this around, these days. On top of the 9 tracks from the original album, we are also getting two bonus tracks, which I really can’t figure where they’re from, might be two leftovers from the recording-session, or perhaps they worked on for a while, before they disbanded and the drummer went for a stint in MESSIAH. You can find the album at: www.vicrecords.com