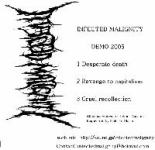 This violent four piece outfit delivers really damned good brutal, ferocious killer Death Metal. INFECTED MALIGNITY are saluting from Tokyo and puke out their first three song demo, simply entitled "Demo 2005". It’s unbelievable that the band was just founded in Sept. 2004 by three ex-members of DEFIANT MANNER (Katsuyuki, Takuma & Yuuto… Keiichi completes the line-up) as their tracks can already compete (at least in my humble opinion) with the top bands of this genre around this globe. ‘Desperate Death’, ‘Revenge To Capitalism’ and ‘Cruel Recollection’ are excellent, very well executed hyper brutal US-styled Death Metal assaults which should please every fan of fast and guttural stuff. Within the roughly nine minutes the band blasts through the three tracks with merciless speed, at the right moment adding some cool mid paced doublebass passages and groovy rhythms before starting blasting again. The vocals are deep and guttural but not so extreme into the frognoise department. The production of the three rippers is excellent if you consider that it is just a demo. There are many albums out there which have a worse sound than this demo here. So I can highly recommend it to all fans of DEEDS OF FLESH, DISGORGE (US), GORGASM, DYING FETUS and others to check this Japanese horde out. INFECTED MALIGNITY belongs to the top Japanese masters of brutality next to VOMIT REMNANTS. Get in touch with them at infectedmalignity@hotmail.com and visit their website for merchandise infos under http://sound.jp/infectedmalignity. By the way: The band will also play at the TOKYO DEATHFEST on 30th April 2005.