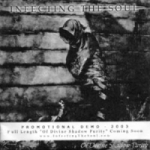 The nucleus of the Chicago based five piece INFECTING THE SOUL already got together in the summer of 1992, but it obviously took them quite a while to finally complete their ranks as this 3-song demo from 2003 seems to be their first musical sign of life ever since. But anyway, it certainly is a nice little taste of their forthcoming debut album “Of Divine Shadow Purity”, which is about to see the light of day in the not too distant future and which will feature all these songs as well. Musically speaking INFECTING THE SOUL is definitely not your typical old school Chicago Death / Thrash style act, but a lot more inspired by melodic guitarwork / – harmonies, kinda close to what the Swedish scene had been offering over the last couple of years. But all those Gothenburg-style haters among you should continue reading here nevertheless as INFECTING THE SOUL managed to mix that with a rather thrashy type of songwriting and a brutally growled vocal delivery – a combination which (in a way) is already kinda unique again. Plus: their melodies never really sound too happy or cheesy in any way, which is absolutely fine with me! Their influences come from completely diverse acts such as AT THE GATES, MONSTROSITY, SUFFOCATION or DIMMU BORGIR and the result is definitely raw death-thrashing Metal! The members of the band basically got together via the internet, have previously been involved in several underground acts such as Avernus, Afterlife, Neuro Toxin and Insides Out (just in case you wanna know) and therefore sound really matured already, and the solid, crunchy production of this demo fits their material pretty good. So, all in all not bad at all, even though I personally mostly prefer an overall more brutal musical approach. But: the demo is available FOR FREE from the band’s website www.infectingthesoul.com so feel free to check them out. Snail mail contact: Infecting The Soul, 3620 West 216 Place, Matteson, Illinois 60443, USA