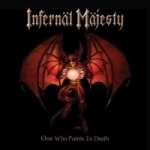 INFERNÄL MÄJESTY
One Who Points To Death
(Galy Records)
46:33min

I’ve followed this Canadian act since their inception back in 1986 and have been one of the few that did enjoy their second album “Unholier Than Thou” from 1998 – and in all honesty a lot more than their overpraised debut. As a lot of you know it, INFERNÄL MÄJESTY have started as a Thrash Metal act at a time when Thrash was the big thing, “Unholier…” showed signs that the band had decided to incorporate Death Metal elements in their songwriting, well on this third effort it’s a bit more obvious particularly in the vocal department with Chris “Christifer” Bailey’s voice plus the addition of a few blast beats. This said, don’t expect – thanksfully – them to have fallen in the actual Death Metal cauldron and have come out of it with the worst elements, no fuckin’ way! The majority of their trademarks are still here and in top form i.e. that neverending rifferama which separates them from the wannabees around. Holy shit, if somebody could give copies of this to the old ladies (guitar team) from SLAYER and EXODUS, then chances would finally exist to see those once godly acts returning to their roots! Hallman and Terror capacities to come up with intense / distinctive riffs most of the time are still intact and I fuckin’ love this. Now this is what I call art unlike those billions of acts whose songs are just a bunch of mindless riffs put together and whose songs are just interchangeable and plain boring. Unfortunately not everything is perfect as a few tunes comes out as being boring at worst, very average at best like the title track or ‘Angels And Acid’ but it always has been the problem with them as they never managed to come up with a 100% winner. Also I could live without some deathly singing parts but there’s worse. So, as a whole, a third solid album from a band that have never changed their style, all power and respect to them. Thrash / Death Metal lies in bands like INFERNÄL MÄJESTY because they truly know what a Metal song is all about and that makes all the difference. This album will be soon released by Black Lotus records from Greece for Europe.