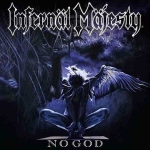 “None Shall Defy”, the debut full-length from 1987, is not just an album, it’s an outstanding monument. It’s a masterpiece, the band’s opus magnum and, in my humble opinion, one of the best Death / Thrash Metal albums ever. Although INFERNÄL MÄJESTY never got the attention they deserved this masterpiece has to be mentioned the same moment you are talking about “Hell Awaits”, “Reign In Blood”, “Seven Churches”, “Master Of Puppets” and the likes ("Ride The Lightning" anyone? – Frank). And although all further INFERNÄL MÄJESTY releases are good and blameless the band surely never was able to release anything close to “None Shall Defy”. But I’m glad the Canadians never tried to copy themselves or tried to release a lame second part of the debut. Anyway, this is not about 1987, this is about 2017 and INFERNÄL MÄJESTY just released “No God”, which is their fourth full-length and their first album since 2004. I have to admit that I had not the highest expectations because the songs that the band digitally released via their bandcamp site during 2015 and 2016 did not kick ass. But fortunately they are still able to deliver some serious Metal. “No God” is an awesome piece of dark Thrash Metal with some blasphemous Death Metal vibes and with very strong, raw, aggressive and unholy vocals. The production is great, too. “No Gods” sounds very natural and powerful. The songs are well composed and arranged, with some gloomy twists and tempo variations. ‘Signs Of Evil’ and ‘No God’ are brilliant songs and my personal highlights on this album. I also have to mention the outstanding guitar duo Steve Terror and Kenny Hallman. More than 30 years after they founded INFERNÄL MÄJESTY their riffs and leads are still truly amazing. To make it short: “No Gods” is a must have. So go and get your copy! www.facebook.com/infernalmajestyofficial, www.hrrecords.de