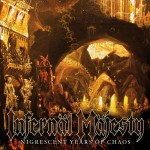 Since INFERNÄL MÄJESTY are more or less on the edge of releasing a new record, Vic Records was kind enough to finally put out a compilation of the complete demo history. Having released three demos (one in advance of the monumental "None Shall Defy" and two prior to it) between the mid 1980s and early 1990s, INFERNÄL MÄJESTY actually never stopped but somehow the interest in them faded after the brilliant debut record. To be honest I have never thought about checking out their whole discography because I thought after "None Shall Defy" nothing interesting happened anymore. But I was wrong. So the first self-titled demo features the four "None Shall Defy" classics ‘Overlord’, ‘Night Of The Living Dead’, ‘Skeletons In The Closet’ and ‘S.O.S’, which means I do not have to give any praise to these tracks since they slay as much in demo version as they do on the album. The next two tracks are from the period two years after the debut and are really strong in my book. The first track ‘Into The Unknown’ starts with a very eerie and twisted guitar melody followed by Chris Bailey’s signature vocals. To me this song continues with what happened two years earlier since it’s all there: interesting drum patterns, great vocals and thought-through songwriting in general. The only thing that differs is that it’s a bit calmer than the previous material. ‘Hell On Earth’ starts again with some weird guitar work but immediately drops into a very fast first verse. Even though it’s a very progressive influenced track it does not miss to be heavy and fast at the same time. Definitely a good two-track demo. “Creation Of Chaos” is what follows now with some big line-up changes: new vocalist, new drummer as well as a new bassist. To my surprise the songs are pretty much in the same vein as the earlier stuff except for some slight expansions here and there. The first track for example features an unusual stomping riff towards the end, with the second they added a bit more Death Metal to their sound (my favorite track by the way), the third track is a re-recording of ‘Into The Unknown’ and the last one which adds some more fretboard action and speed to the lot. Compared to the other two demos this one is, even though it has three new members on it, still 100% INFERNÄL MÄJESTY. Without a doubt a great compilation that is not only interesting for die-hards but also for people who are only familiar with "None Shall Defy". More info here: www.facebook.com/infernalmajestyofficial, www.vicrecords.com