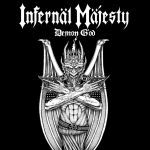 INFERNÄL MÄJESTY has been blasting our eardrums for a long-ass time. Since 1986, however, the band has only released four full-lengths, the most recent from 2017. But you know what? That’s ok. This album actually consists of 2007’s EP “Demon God” and “Demo 1997”. Two interesting fun-facts about the band… 1) They were previously named LORD SATANS DECIPLES and OVERLORD. 2) The bass player Daniel Nargang is the current vocalist for KICK AXE. “Demon God” begins with ‘Burnt Beyond Recognition’. A thumping bassline introduces the song until the chugging, throbbing guitars kick in. The vocals are a mash-up of throat-ripping screams and gurgling growls. The Black / Thrash force of aural atrocity permeates through the speakers like a wild orc hunting its weak prey. ‘Systematical Extermination’ is a maze of spiraling electric riffs that lead to a scream bubbling from the black depths of Hell. ‘Crusade’, after close to a minute, becomes a thunderous, towering giant of a song. ‘Nature Of Assassins’ shows its Thrash roots as ‘S.O.S.’ (featuring CANNIBAL CORPSE members George “Corpsegrinder” Fisher on guest vocals and a guitar solo by Rob Barrett – Frank) will mesmerize you with its razor-sharp guitars before shoving your ass into the nearby crushing mosh-pit. The final track of the EP, ‘Skeletons In The Closet’ consists of mocking vocals (courtesy of ZIMMERS HOLE’s Chris Valagao – Frank) and Black / Thrash at a furious pace. The release is rounded out by “Demo 1997”, consisting of ‘Is There A God?’ and ‘Gone The Way Of All Flesh’, which, though slightly less produced, still consistently fits into this overall offering. Now if we can just continue to receive new material from INFERNÄL MÄJESTY also, the world will be a better place. For more info, check out www.facebook.com/infernalmajestyofficial, www.vicrecords.com