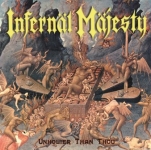 Canada’s long-time Thrash Metal outfit INFERNÄL MÄJESTY have been kicking dirt in the faces of listeners for three decades. Their second full-length "Unholier Than Thou" from 1998 shreds with the best of them. Still going strong currently, a good indication of why they’ve lasted all these years is represented in this album. The starting off title track ‘Unholier Than Thou’ is a slithering, crawling snake of a song. It darts forward with its mid-tempo attack, waiting to slink within range of its target. ‘The Hunted’ is almost tech Thrash in its presentation, an early sign of a genre that would emerge prominently in present-day Metal. So, though with a classic Thrash sound, its fretboard-scaling riffs were actually a little ahead of their time. Chris Bailey’s vocals, similar to PESTILENCE in ways, screeches and rasps throughout ‘Gone The Way Of All Flesh’. INFERNÄL MÄJESTY has its way on this album of staying consistent while pushing the envelope towards a refreshing sound different enough from other bands of that era. ‘Black Infernal World’ is just that, a smoldering ruin of desolation that never really picks up speed, but shambles its way through the putrid path it has chosen. There are even hints of OBITUARY strewn throughout this track. The fifth track ‘Roman Song’ takes almost two minutes before Chris bellows out ‘Fight for your lives!" A mixture of more upbeat Thrash with guitars all over the place and throttling drums, the track never lets up. ‘Where Is Your God’ is a mosh-lovers dream. ‘Death Roll’ is a another steamroller once it gets going. And ‘The Art Of War’ ends the album with its doomy Thrash the first half before running full-tilt in a charge towards battle. The seven live tracks from 2000 (originally released as "Chaos In Copenhagen" – Frank), which all sound quite solid, feature probably the fakest-sounding audience I’ve ever heard. But if you ignore that little nuisance, you get a good feel for the energy the band demonstrated in their shows. For more information, check out www.facebook.com/infernalmajestyofficial, www.vicrecords.com